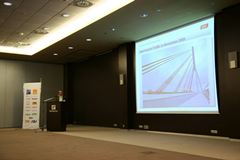 The Department of Concrete Structures and Bridges organizes two national conferences with the international participation every two years. The first one is called Concrete Days, which is held in even-numbered years since 1994.

The second major conference is called the Concrete Repair, Rehabilitation and Retrofitting, which is held in odd-numbered years from 1997 at Smolenice castle.

In addition to these conferences, which are held regularly, the department has organized during its existence a number of seminars and scientific events. One of the biggest events with rich foreign participation was for example the conference of Design of Concrete Structures Using Eurocodes, which was held in 2011 in Bratislava. The conference was conducted in English language.