In 1950 there is a change in institute organization, new "Department of building structures" with head of the department Prof. Havelka is established.

Department was created by the union of the:

In 1951 the "Department of building structures" was divided to the "Department of concrete structures", led by prof. Havelka and to the "Department of steel structures and bridges" led by prof. Lederer. This practically started the third period of the department existence, which lasted until 1958. Radical conceptual changes have taken their place in this time. Within the civil engineering institute four specializations were formed and on the architecture institute one new specialization emerged focused solely on buildings. At the Faculty of Civil Engineering and at the Faculty of Architecture and Building Construction the concrete structures were taught by our department. As the concrete disciplines increased also the number of teachers had to increase. Another professor was approved - prof. Josef Wünsch and also one new lecturer was approved- Ing. Jozef Trokan. 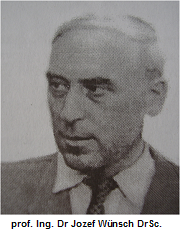 Prof. Wünsch with his activities deeply affected future direction of the department both in theoretical as well as in the practical field. He was the first who introduced on Faculty of Civil Engineering the lectures on mathematical flexibility with their immediate implementation on the reinforced concrete slabs and walls, lectures on applied mathematics, in which he served a selection of methods, such as numerical, suitable for static and dynamic analysis of structures. His lectures on prestressed concrete, were closely related to the expanding precast building elements and their installation. The biggest practical design of this period was the arch bridge over river Váh in Sered with 6 spans. Original idea was the introduction of large compressive forces to the construction of reinforced concrete structures by means of pairs of wedges moving on steel rollers pushed against each other by means of hydraulic jacks. Force action of the jacks was significantly exerted by these wedges. Another application of these coupled wedges was during the demoulding of the road bridge over river Váh in Komárno, associated with the activation of the subsoil. Prof. Wünsch had a considerable influence on the work of many colleagues and graduate students in the Department as well as on the Slovak Academy of Sciences, as well as on many students, which were led to a new understanding of the reinforced concrete structures.