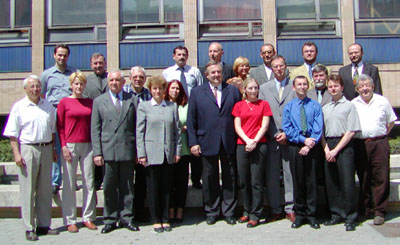 In 1992, the Department started to publish its own Annual Report. In this anthology, there are published scientific and professional works of members of the department, which were published in English or German language. Annual Report is sent to the affiliate departments at home and abroad, in turn the department receives similar works from universities from Zurich, Munich, Aachen, Leipzig, Darmstadt and publications DafStb.

In 1994, we organized " the first Slovak concrete conference" with an international participation in English language. Nearly 200 guests took part there, including 25 foreigners. General papers were presented by prof. R. Tepfers from Sweden, prof. H. Corres from Spain and prof. P. Schiessl from Germany.

In 1996, the Department established a tradition of professional and social events of concrete community called "Concrete days". A successful first year of this event was followed by the second one in 1998. After that, a two-year cycle of organizing these meetings was agreed.

In 1998 the first U.S.-Slovak engineering research project started between Ming-Liang Wang of the University of Illinois, Chicago, Milan Chandoga of the Slovak Technical University and Andrej Jarosevic of Comenius University, Bratislava. It examined novel approaches to measuring magnetic properties associated with actual stress levels in existing structures. Specifically, this work featured detection of damage and measurement of cable forces in cable stayed and suspended bridges, using an Slovak defined approach.

In 1998, the Laboratory of the department received as the first university laboratory from the construction industry an accreditation as a Testing laboratory oof the faculty of Civil engineering. A main contributor to this success was the head of laboratory Ing. Vladimir Priechodský, PhD.

In 2011, the department organized an important conference Design of concrete structures and bridges using Eurocodes, which was attended by several experts from Europe.