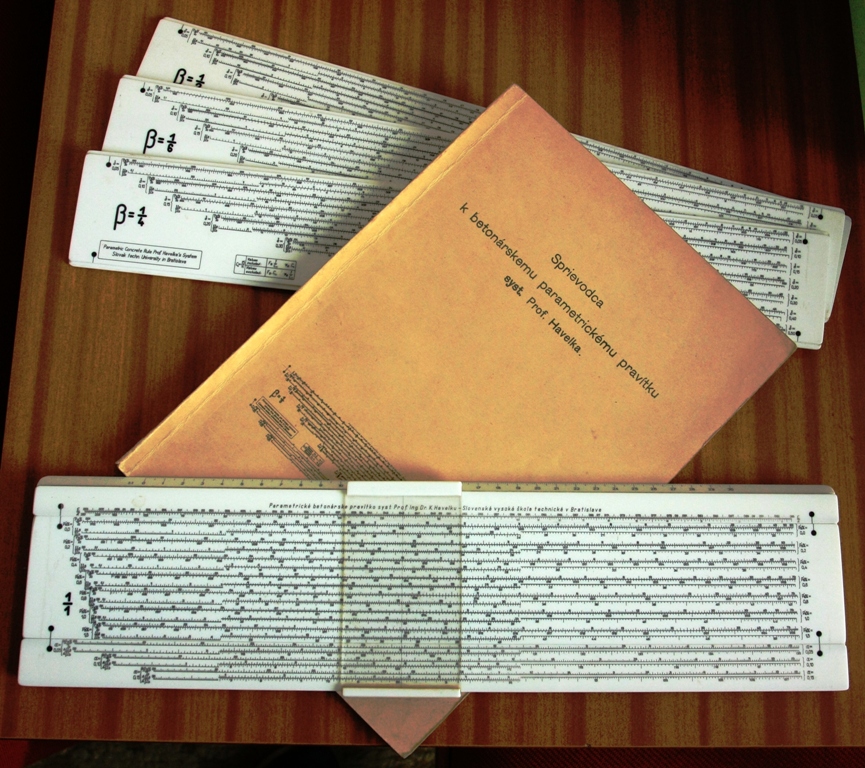 The table is printed on the back of the parametric concrete ruler and it is strongly associated with it. For that period, in the classical theory of reinforced concrete it was a remarkable design tool, which in relation to the method of substitution cross section enabled to quickly, easily and also accurately design sections of common shapes for all common types of loading.

The ruler has its predecessor in a similar ruler of prof. Rieger with scales based on a logarithmic principle. Especially, the straining by bending, for the rib and rectangular cross-sections, could have been very well evaluated. The cross section was categorized according to the width and height parameters and as well as according to the size of the reinforcement considered at height 0.1 h. All dimension have been reduced according to the cross-sectional dimensions, h/b. The Riegers solution led to difficulties in case of eccentric loading where also the eccentricity reduction was necessary. The Riegers ruler did not manage this problem in a sufficient scope. With the regard to increasing percentage of reinforcement in logarithmic scales it loosed its accuracy. A solution of Havelka removed these shortcomings by transforming the problem into the bending principle.

It was made by developing the idea  of the so-called substitutionary bending, which is processed in the author's doctoral thesis "Excentrical pressure of reinforced cross sections with the eccentricity in one or both main axis".  The result of this operation was that the eccentric tension and pressure could be treated as a simple bending load. Works on the ruler inevitably brought a tremendous amount of quantification necessary for accurate rendering of functions and scales. Of course, lectures were led in close connection with the above-mentioned scientific works. However, in this era, only Riegers ruler was used during the exercises because the new one was only at the stage of development.