At the same time, Laboratories of concrete structures were built in the area of Trnávka. A large testing hall was built with a 5-ton crane, massive load bearing floor and with 600 and 300-tonne hydraulic presses. A carpentry workshop, concrete plant, laboratory for non-destructive methods and offices were included too. These rooms started to be used in 1967. The merit of the construction has mainly Prof. Trokan. The first Head of the laboratory was Ing. John Chochula, PhD. 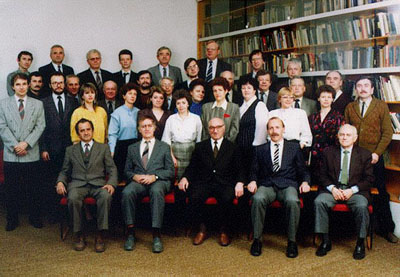 During this period, the number of employees of the department is growing. Also, the number of theoretical works and dissertations is increasing. "Theory of linear reduction of shell structures " by Havelka is publicized. The scientific work of teachers is strongly associated with the practice. In this period, there are addressed: distribution of loads in the cross direction on small bridges, large-span floors, suspension roofs, ultimate states and counteraction of the construction technologies with the structural behavior of bridges.

In 1967, the first Computing Laboratory at the Faculty of civil engineering was established at the Department of Concrete Structures and Bridges under the supervision of Prof. Ing. Miloš Balla, CSc. Also, the computer ODRA 1013 started to be used in 1967. The very first programs based on the finite element method - frames, slabs, walls were already functional in 1968. The most important and spread software product was the system of programs Prefabricated structures for computers advice SMEP and EC, which was later reprogrammed for personal computers and is known as Concrete Structures. The Department has started in 1975, as the very first one, with the education of civil engineers with the use of computers in the design of load-bearing concrete structures. 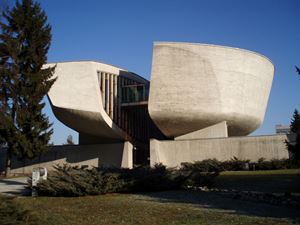 In 1968, a technical challenge appeared for the design and construction a monument - Museum of the Slovak National Uprising in Banska Bystrica, which was sketched by the architect Kuzma in the shape of two clenched fists. Structural design and also the supervision during the construction of the shells were carried out by employees of the department and directed by Ing. R. Lamprecht. This structure is made of reinforced concrete with the architectural concrete and has the function of the museum and sculpture. During the design and implementation phase, there a lot of theoretical and engineering problems had to be solved.

In the years 1967-1972, a steel bridge named SNP (abbreviation of the Slovak National Uprising) in Bratislava was constructed under a construction design prepared by prof. Arpád Tesár from the Department of Steel and Timber Structures and assoc. prof. Jozef Zvara from the Department of Concrete Structures and Bridges SvF STU. The team from the Faculty of Architecture, led by prof. Jozef Lacko, participated on the design of the bridge too. 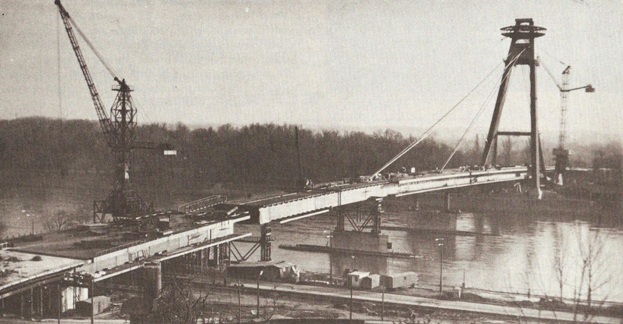 In addition to assoc. prof. Zvara, also other members of our department took part in the structural design calculations of the concrete parts of the bridge (foundations, anchorage blocks, flyovers). During the construction period of 1969 the bridge with main span 303 m was the world record holder in the category of cable-stayed bridges. The bridge had the 4th longest cable-stayed bridge span when it was opened to traffic on August 29, 1972. Nevertheless, it maintained its first place in the subcategory of cable-stayed bridges with one plane of stays long after. In the year 2001 it won the Slovak Construction of the Century award. In 2011, the building was announced as a building of the century in Slovakia. The bridge is suspended on a single pylon, which is 84.6 meters high. Total height from the ground to the top of the pylon is 95 m.

In the years 1985-1989, there were gradually developed three expertise reviews that addressed the complex problem of failure of reinforced concrete wall of a silo in the cement production plant Kombinát Záhorie in Rohožník. Silo has been damaged during the storage of hot clinker.

In 1988, there was developed "a guideline for calculating the load bearing capacity of old bridges" and processed standardized rules and characteristics of the materials for examination and determination of the structural condition of bridges in Slovakia.

The construction of the Lafranconi concreted bridge over the river Danube in Bratislava was prepared and realized in the years 1987-92. With the technical assistance of Dopravoprojekt and Doprastav, members of the department participated in the realization of the bridge from the design phase up its opening for traffic.

From the whole range of conceptual issues, the free cantilever method faced the most challenging issues. The most complicated issue was the connection the significantly cantilevers with different lengths - a great cantiveler was 120 m long and the small one was only 50 m long. Technically, two equal length cantilevers in one span would cause significantly fewer problems and would enable to reach 245 m in the main span, which would rank the bridge among the world leaders in the category of prestressed concrete bridges. The implementation of unequally long cantilevers was adopted especially because of the works associated with setting up piers in the river bed and also the resulting architectural conception of the embankment at Bratislava side. Dr. Jaroševič in cooperation with our department developed a monitoring system on the principle of magneto elastic method for a long term monitoring. Production of sensors and their installation to the external prestressing tendons was provided by the Faculty of Civil Engineering.

An intensive development of prestressing system MONOSTRAND, under the leadership of assoc. prof. Milan Chandoga, PhD, and its usage for additionally prestressed  flat slabs started in Slovakia in 1991. Our laboratory participated also in the development of the PROJSTAR anchoring system.